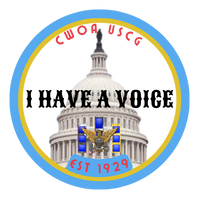 PURPOSE
CWOA's Legislative goal is to be the Voice for America's Coast Guard on Capitol Hill. This is done through Legislative Advocacy efforts on Capitol Hill and by educating Congress and the nation on issues pertaining to our Coast Guard and National Defense as well as our Veterans. We continuously keep Members informed of what's happening  and provide them with resources they need to be knowledgeable of the issues.

NATIONAL LEGISLATIVE OBJECTIVES
Formed from our National Resolutions and voted on at every CWOA Annual Meeting .

LEGISLATIVE DEPARTMENT CHALLENGES
Congressional Meeting Requirements and Expectations
This is a Federal outreach program, so we need our Liaisons to note the difference between Federal Congress versus State Legislature.  Liaisons should stick to Federal issues of concern to CWOA (CWOA’s National Resolutions and Legislative Objectives) that benefit all members of the Coast Guard and Veteran communities (no State or Local issues please).
—We are asking our Liaisons to meet with their Members of Congress at least twice a year (in their States ONLY, not in DC), preferably once in the late spring and once in the late summer/early fall. We ask for at least one meeting with each of your Senators, and if possible, one meeting with your Representative.
CONGRESSIONAL TIMELINE FOR AUTHORIZATION & APPROPRIATION BILLS
(In an ideal Congressional and Budget World)
TIMING IS EVERYTHING
The best time to meet with your Senators and Representative is when Congress is in recess and they are in their State/District offices.
​State/District Congressional Staff
—Know Who to Talk to: A typical office in the State/District has a State/District Director, Scheduler, Caseworker(s), Regional Affairs Representative(s) and Staff Assistants (front office receptionists).  Directors and Regional Affairs Representatives/ Liaisons are the target audience.
—Know What They Do: State/District Directors (sometimes the Chief of Staff) are in charge of all operations within the State/District while the Senator/Member is in DC.  Regional Affairs Representatives/ Liaisons are the ‘folks in the field’ listening to local community leaders, State government and you, the concerned constituent who then relays the information/concerns to the Director or to the DC office (thus strengthening Legislative Director efforts in DC).
Topics to Discuss
—Tell our Story: Tell them first who you are, your background, and who you are representing, CWOA, and what our mission is and how we are one of the largest Advocacy associations for the U.S. Coast Guard, promoting and helping the needs of Active Duty, Reserve and Veteran Coasties, with both equipment needs of our current Coast Guard and Coasties AND the personal care needs of our Coasties and Veterans.

Know What to Talk About: Don’t come in with a laundry list of the things CWOA is concerned with/wants.  Pick and choose 1-2 topics from the CWOA Legislative Objectives card (mix it up, one equipment need and one veteran/personnel issue, etc.).  Feel free to elaborate on issues you are following/familiar with.
RELAYING INFORMATION TO AUSN HEADQUARTERS
Click Here To Join The Legislative Corps