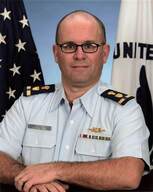 Get to know your CWOA Vice President candidate, CWO4 Mark Cortor (ret). Mark retired from Active Duty in 2020 with 25+ years of service to our U.S. Coast Guard. He is extremely passionate as to military non-profit organizations, as he has served as the former President of our CWOA (2018-2020), former President of the CPOA (Petaluma Chapter 2007-08) and Coast Guard Advisor to the Board of Directors of the Sea Service Family Foundation (SSFF)(2019-20).

Mark is a CWOA Lifetime Member (member in good standing since January 2009), current Vice President of the Open Country Chapter, Chairman of the Long Range Planning Committee, Committee member of the Permanent Finance Committee, Bylaws Committee and 100 Anniversary Committee. He has formerly served as Chairman 100 Anniversary Committee (2021-22), Long Range Planning Committee (2022), Communications Committee (2020-21) and was a member of several other committees since his time of President ended in 2020. Beyond the CWOA, he is currently the SSFF Chief Advocacy Officer and active member of the Cpl Chris S. Ebert Marine Corps League Detachment #1221 in Forest City, NC.

The traditional role of our CWOA Vice President has been very limited to being the Chairman of the Membership Committee, while also being available to serve as President in the absence of the current President and while Mark feels those are very important to our Association, he also believe a new role of the CWOA VP should be more engaging with our Chapter Presidents, along with their respective Board of Directors as to expand our organization influence by having the energy created by our Annual Meetings carry throughout the year with solid communications between our Chapters and the Association's BODs via our next Vice President.
​CWO4 Bryan Kaseman

CWO Kaseman assumed the duties and responsibilities as the Mission Execution
CWO Assignment Officer at Personnel Services Center in Washington DC during
the summer of 2019. In this capacity, he is responsible for more than 1300
personnel in the following CWO specialties: BOSN, ENG, ISM, MLES, MSSD,
MSSE, MSSR, and OSS.
CWO Kaseman’s previous tours include:
 2000-2005: FA/FN/MK3/MK2 aboard CGC BISCAYNE BAY
 2005-2008: MK2/MK1 at Station Marblehead, Engineering and Boarding
Officer
 2008-2012: MK1/MKC at Station St. Ignace, Engineer Petty Officer
 2012-2014: MKC aboard CGC BLOCK ISLAND, Engineer Petty Officer
 2014-2016: MKC at Station Marblehead, Engineer Petty Officer
 2016-2019: CWO2 at PSC-EPM, MK Assignment Officer
CWO Kaseman’s CWO specialty is Naval Engineering. He is from Pemberville,
Ohio. He has been a geo-bachelor since coming to EPM in 2016 and lives the full
time RV lifestyle. When not working, you will likely find him spending time with
his dog, camping, or hunting.
CWO2 Chester Buohl

CHESTER BUOHL was appointed to CWO on 01June2021, and assigned to C5ISC as a Project Manager within the BUSINESS OPERATIONS DIVISION. CWO Buohl has since become the Coast Guard’s first Project Recovery Manager, entering into chartered evolutions to surgically remediate or mitigate significant risks to high visibility projects within the C5ISC. He currently serves as the Vice President of the COAST GUARD CWOA NORFOLK DISTRICT CHAPTER and is a very active contributor on the C5I Warrant Officers TEAM.

Throughout his career, CWO BUOHL has aggressively pursued diverse and demanding assignments to develop his technological, leadership, and managerial acumen. As a junior technician stationed at ESD DETROIT, he voluntarily deployed with the USCGC EAGLE and the USCGC TAMPA, flourishing as an independent technician and gaining invaluable underway experience and leadership development. His first exposure to Incident Management Systems came with another voluntary deployment aboard the USCGC FORWARD- When the Deep Water Horizon Rig went up in flames, he became the THSP on site and was instrumental in setting up the first CTU. On his next tour at USCG TRACEN PETALUMA IT A-SCHOOL he became the first IT Instructor to obtain the distinguished Master Training Specialist credential. As a Master Training Specialist, he developed and implemented curriculum for the unsupported A+ Hardware and Network+ units, resulting in an unsurpassed 93.4% pass rate, successfully certifying 266 students in compliance with the DOD Information Assurance requirements at a cost savings for the Coast Guard of $485k. Concurrently he audited countless classrooms and associated curriculum while mentoring and qualifying 30 new instructors across the TRACEN. After a year as the LPO at ESD KEY WEST, he advanced to Chief Petty Officer and accepted short fuse orders to ESD SAN JUAN. He was welcomed into the Mess officially on 10NOV2016. Two months later, he was able to attend CPO Academy Class 228. Designated as COM-T for the Hurricane Maria IMT, he inventoried and deployed $13.5M worth of contingency C4IT equipment throughout the Puerto Rico and USVI while directly supervising 31 Petty Officers, 1 GS, and 44 TDY Technicians throughout the Hurricane Recovery and Reconstitution efforts. By the end of his tour, he was Acting ESD Supervisor turned Acting Department Head of the newly stood up BASE SAN JUAN. He leveraged relationships with the D7 DAR, TISCOM-PLD-NET-WLB Team, Inter-Agency Partners at Fort Buchanan, and LEC’s to facilitate AOR-wide bandwidth increases across PR and the USVI creating a more robust infrastructure capable of handling modern operational demands. Those same relationships were called upon to include the USCG in the development of the PRAWSII migration for all of the DOD POTS, T1, and Microwave Circuits in Puerto Rico—this effort continued through his transfer to be the Assistant Supervisor of the C5I Shop at ATC MOBILE… and his subsequent promotion to CWO2 the following Summer. 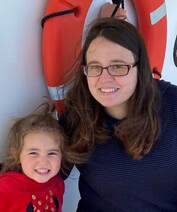 ​ISM2 Jennifer Thompson is currently serving as the Supervisor at Electronics Support Detachment Seattle.  She was born in Bremerhaven, Germany and claims Elizabethtown, KY as her home. She was recruited in the Coast Guard on December 3, 2007 from Recruiting Office Louisville, KY.

Previous units include Station Grand Isle, TRACEN Petaluma, ESD Boston, Coast Guard Recruiting Command, Advanced Education (ACET), and Base Portsmouth. She commissioned this past June to assume her current position in Seattle. She is the 2022 CGMA Ambassador of the Year, and previous served on the CGMA Board of Control.

CWO Thompson met and married her husband LT John Thompson in 2009 when they were both going through IT A-school. They have two children, Finnegan, 7, and Piper, 4. Jenn is an audiobook enthusiast and a big fan of Burn Boot Camp.
CWO3 Jake Elks

CWO3 Jake Elks currently serves as Vice President of Reserve Affairs and the sole Reserve Chief Warrant
Officer at Marine Safety Unit Savannah Georgia. He joined the national CWOA and local Philadelphia
Chapter in 2016 where he has helped organize and participate in several service projects to assist the
local community. In 2018 he became a plank owner in the Empire State Chapter while stationed at
Sector New York. In his full-time job, he serves as Business Development Manager Specialty Hazards –
Hangars &amp; Munitions for Det-Tronics. Prior to being selected as a Chief Warrant Officer, Jake was a
Chief Marine Science Technician at Sector Hampton Roads.

Jake is a 1997 graduate of the University of North Carolina at Asheville and holds a Bachelor of Science
Degree in Environmental Science. He has been married to his wife Susan for 22 years, they have two
children Garrett and Claire, and reside in Unionville, PA. 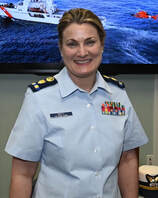 ​I am a life-time member of the CWOA and look forward to supporting the Vice President of Reserve Affairs office. In June 2022 I became the Reserve Program Specialist at CG Headquarters in the Office of Shore Forces, CG-741. Our office oversees the Shore Forces Reserve Management Plan, applicable to Sectors with 30 or more reservists. I enjoy staying current with reserve policies and work with Reserve Personnel Management (RPM) and all Headquarters staff with a reserve nexus.
Return To Ballot